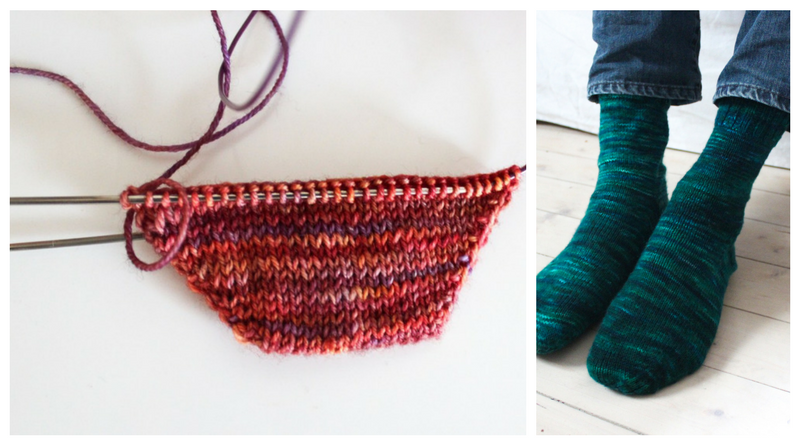 Are you a sock knitter dying to learn how to design your own knitted socks? If your answer is “Yes!”, these sock design tutorials are the one-stop resource for you.

Sock Knitting for Everybody: Table of Contents

Toes are shaped by increases or decreases, depending on the direction of knitting (toe-up or top-down) or by using short rows.

Human toes are not symmetrical, but knits are stretchy so there’s no need to distinguish between the outer and inner side of the toes: Increases and decreases can be worked symmetrically on both outside (lateral part) and inside (medial part) of the foot.

When working sock toes top-down stitches are decreased until about 8 stitches are left. The working yarn is then cut and pulled tightly through the remaining stitches to close the gap at the tip of the toes.

When working toe-up, the most convenient way of starting your toe section is by using the figure-eight cast on method. An alternative is using any provisional cast on grafted together later, or working toes in a completely different way – by short row shaping.

The most common sock toes techniques are

If you’re feeling adventurous: you can work sock toes for Flip Flops or Wee Toes (see picture below), too – but that’s a different story (and a different tutorial to be published later this summer).

This technique is the most commonly used technique in German speaking countries when working socks top-down. It’s done by working symmetrical decreases on each side of the toes with two knit stitches between the decreases, creating a knit stitch band on each side. The advantage of not pairing the decreases directly is that we get no gaps (paired decreases next to each others tend to create holes).

The pattern template below assumes two stitch markers being in place – one on each side of the sock, with an equal stitch count in between.

My all-time favorite method of toe shaping when working toe-up is to start with a figure-eight cast on and increasing using kfb stitches until I reach my desired stitch count.

No clue about how to work short rows? Consider reading my resource on knitting short row The Complete Guide to Knitting Short Rows first!

Short row toes start with a provisional cast on of half of the desired end stitch count for the foot section (your final sock circumference) and shape the toes by short rows – one short row wedge for the sole, one for the instep.

Rounded toes are shaped by spacing out the increases (or decreases) equally around instead of pairing them together at the sides. Personally, I haven’t used this version of knitting sock toes ever but they seem to be quite popular among knitters, so I’ll include them for completeness.

The pattern template below assumes we are working top down – for a toe-up version, figure-eight cast on 9 stitches and work the opposite way (the last round first), replacing k2tog stitches with kfb or m1.

Working toe-up, the most convenient techniques to use are Band Toes, Short Row Toes or Julia’s Toes.

How to Knit Sock Toes Top-Down

If you decide to work your socks top-down, Julia’s Toes are not an option (it’s a toe-up only technique, although a similar technique could be implemented – it just wouldn’t look good, as paired decreases next to each other tend to create gaps). I’d recommend not using short row toes neither (except you really like and are good at grafting) but feel free to use any other technique mentioned above: Band Toes or Round Toes.

What About Your Preferred Toe Knitting Method?

Which way of knitting sock toes is your number one and why? I’m curious to hear your story – please leave a comment below!