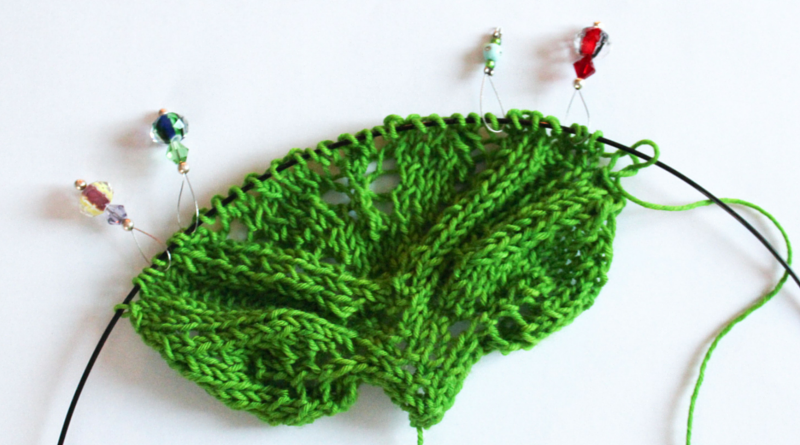 This article is part of the Complete Guide to Lace Knitting.

There are certain symbols that are common in knitting charts and used by a lot of designers. Examples are empty squares for a knit stitch, a dot for a purl stitch and so on. There’s variations on the symbols used between designers and sometimes even their patterns, but one thing is for sure: each knitting pattern which uses charts includes a legend for the knitting symbols used. (If not, you might consider returning the pattern.)

On the left side the symbol is shown, and the instructions are provided on the right side. There’s one symbol per instruction divided by a horizontal line. the words shown in bold face are the commonly used abbreviations of the specific stitch or its description, respectively.

An example of knitting charts is shown below (it’s a border chart, also from the Marlene knitting pattern). So what do we see here? Let’s take a closer look.

The white part of the rectangular grid (rows 1-6 and columns showing numbers above them) is the real chart. Within the chart, one square represents one stitch in your knitting.

Charts are read line by line, starting at the lowermost right corner (row 1, column 1) and continuing in the same way you knit and your working thread is located. For each little square, lookup the symbol in the legend to find out which stitch has to be worked.

We start  – with 4 stitches on the needle – at row 1, column 1. The square at this position is white only. Looking up the white square in the legend unveils that it represents a knit stitch – we knit one stitch.

The next stitch is row 1, column 2 which is white too. So we knit the second stitch, too.

Row 1, column 2 shows a different symbol: a circle with a 3 inside of it. Looking it up tells us to yarn over three times. So we work three yarn overs.

The next two stitches are white squares again, so we knit another two stitches. And that’s it, we ran out of stitches!

The next two squares are dark gray, looking it up in the legend shows that this is “no stitch” – these squares are there just to fill up the rectangular grid. These “no stitch” squares occur only in charts where the stitch count is not constant over all rows.

The first line of the chart translates to the written instructions k2, YO three times, k2.

Our working yarn is now at the very left end of the right side (the first row is always a right side row unless otherwise stated). We continue to read and knit our chart: the next stitch is row 2, column 7. Why? Simply because this is the position of our working yarn and we are working flat.

Working Flat Or in the Round?

As the numbers in the light gray area alternate on the right and left sides of the rows, this chart is worked flat. If all row numbers would show on the right side only, each row would be started and read from right to left – the chart would be worked in the round (otherwise it wouldn’t work out with the position of your working yarn).

If there are no clear row numbers (or none at all) in the charts of a specific pattern, refer to the pattern instructions whether the project is worked flat or in the round.

How to Read Chart Symbols on Wrong Side Rows?

Chart symbols are all charted viewing the knitting from the right side. Continuing with column 7, row 2 we slip the first stitch (look up the “V” in the legend). The next two squares show dots – purl stitches. So as we are now facing and knitting the wrong side of our knitting, how is this stitch worked?

We are facing the wrong side of the knitting but charts show all symbols from the right side of your work. Some legends take this into account by stating “knit on RS, purl on WS” for the little white “knit” square and “purl on RS, knit on WS” for the square with the dot in it. (Maybe I should, too. For me it’s so obvious but I’m no measure.)

Taking Away the Fear of Reading Charts

Reading charts is not rocket science. Cast on four stitches and try to work the small chart shown above. Did it work out for you? Let me know if this article has been of helpful for your skills in knitting from charts!