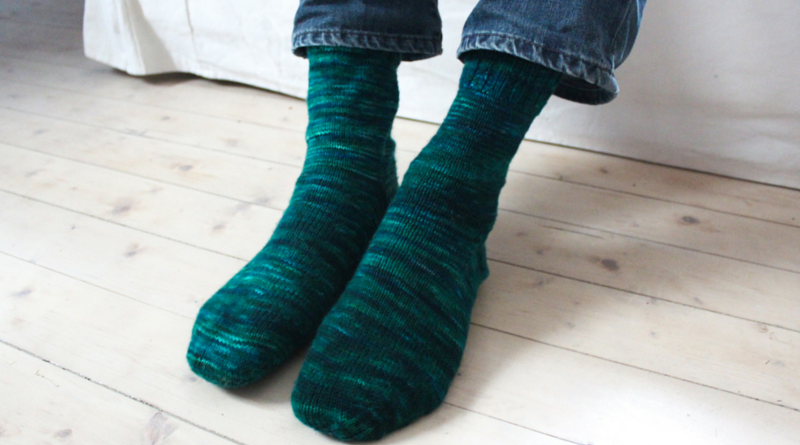 May I introduce you to German short row heels, Dutch heels, toe-up flap heels, and top-down flap heels? This variants are my personal top five of all heel knitting techniques for hand knitted socks.

Every sock knitter has got it’s own favorite when it comes to knitting socks. Toe-up or top-down? Long, short or legs with calf shaping? Round toes, band toes or simple “V” toes? And what about the heel?

The variants of heel construction methods for hand knit socks seem to be endless. There are standard flap heels, Dutch heels, boomerang heels, round heels, the hat heel, afterthought heels, toe-up flap heels and many more.

Also known as the Boomerang or Kylie Heel or as Bumerangferse, which is the German term for it. It’s quite popular over here in Germany, actually!

Main features of short row heels: It can be worked as an afterthought heel, has a snuggle fit and is easy to knit if you know how to work short rows. It does not provide additional stitches at the instep which is the main reason I mainly use it in female sock patterns – it’s not the widest version of a heel. But it’s main advantage is that it can be worked on any number of stitches.

The Kylie heel uses the German method for working short rows – with a special stitch referred to as “double stitch”. To make a double stitch, insert needle as if to purl with yarn in front. Slip stitch off the needle, pull working yarn strongly to back, so the slipped st falls to the back and the stitch in the row below is pulled up over the right hand needle.

Divide H by three and determine the remainder of the division.

As soon as you know the numbers O and C you can start right away.

First half of heel:

The yarn is positioned at the beginning of the heel again.

Second half of heel:

That’s it, basically. Give it a try! 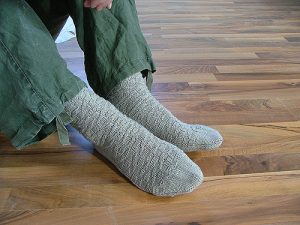 Also known as the square heel, the Dutch heel can be worked without short rows. The main feature are visible, straight lines at the bottom oh the heel and it’s square (well, what else) shape.

The Dutch heel incorporates additional circumference at the instep – but not as much as the standard heel flap – as the stitches of the heel flap are decreased and not short rowed (and therefor staying constant in stitch count).

For example, a sock heel worked over 30 stitches on a 60 stitch sock has got nine stitches left after working a Dutch heel but 30 when working a standard flap heel. This means the instep of a flap heel is 15 stitches wide on each side but just nine stitches total on the Dutch heel.

Here is a Dutch heel pattern template for a 60 stitch sock. The heel itself is worked over 29 stitches. 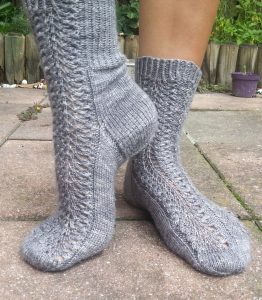 If you prefer to work your socks from toe up but have a weakness for flap heels, this one might be for you.

Basically, it’s a reversed standard flap heel. But instead of increasing by picking up stitches at the flap’s edges and then decreasing, the instep increases are worked first and then decreased as you work up to the ankles.

I created this toe-up flap heel a few years ago when I created my Strausserl Stockings pattern (shown below): my standard short row heel just did not seem to fit such an elegant pair of socks, so I created a new one on the fly: my very own version of toe-up flap heels! 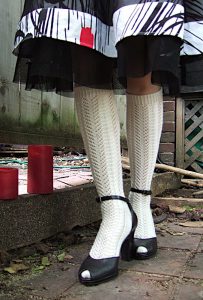 Basically, it’s a reversed standard flap heel, but instead of increasing stitches by picking up stitches at the flap’s edges and decreasing, the instep increases are worked first and then decreased as you work up to the ankles.

Worked this way, the decrease lines (pick up lines at standard flap heels) are clearly visible, a feature which is considered to be a bug by others. It’s all a matter of personal preference, as always in knitting: There’s more than one way to do it!

Here’s the pattern outline for my toe-up flap heel. The template uses a stitch count of 60 stitches.

After toes have been worked, work in pattern until foot measures about 3 3⁄4″ (9.5 cm) less than desired length. (You will now increase one stitch at each side of the stockinette sole every other round.) Divide stitches as follows: instep 29 sts, sole 31 sts.

(You are now facing the RS of your sock again.)

Now you can continue knitting the leg!

The standard cuff-down flap heel is especially suitable for men’s socks as it features a large instep increase and therefor plenty of room for large male feet’s insteps.

The construction schema is simple: work the flap, a few short rows for the turn heel, pick up stitches along the edges of the flap, and then decrease the flap stitches.

In the standard Vanilla flap heel socks you can see on the left, the flap is worked in a simple slipped stitch pattern to increase the heel’s durability. You can of course also just work the heel in plain stockinette stitch or use any other stitch pattern.

In the example (heel only) pattern below a total stitch count of 60 stitches in total is used. Assuming you have worked the cuff and the leg and are ready to start the heel, proceed as follows:

Repeat the last two rows until you have worked 30 rows (15 edge stitches) in total.

Repeat the last two rows until ten double stitches have been worked on each side. You are facing the right side of your sock again.

Repeat the last two rows until all instep sts are eaten up and 60 sts remain, then continue in pattern for foot.

An example for this type of heel is my free pattern Mike’s Socks shown below. 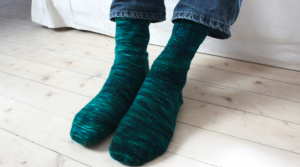