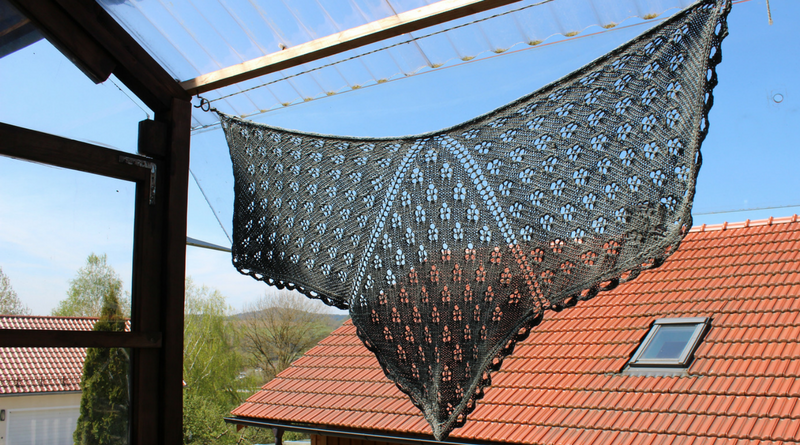 I’m always improving my books, articles and knitting patterns. A few weeks ago, browsing the third edition of Shawl Design in Plain English: Fancy Shawl Shapes, I had a look at the illustrations in the book and suddenly realized a variant of a star segment looks exactly like knitting spacecrafts.

The shape I’m talking about is shown below. It’s based on a three-panel polygon with three additional corners. Am I the only one seeing a spacecraft here?

Obviously I started knitting and experimenting straight away. The basic shape is a simple construction and relatively easy to design (have a look at how to design polygon shawls and triangle shawls first, eventually).

The only tricky part is the edging or border when working the star corners. Especially the inner two corners (marked pink) need some attention. There are more stitches in the border than available at this point of the knitting, so we need to make as many stitches per side as our border needs.

In the prototype, I used a four stitch border (so I needed eight additional stitches per pink arrow total) but I only had one central stitch (the one separating the polygon triangles) available. I therefor made seven stitches total: four on one side, three on the other (using the central stitch additionally to create four total). The pattern will be released within the next days – it’s called Bird of Prey. And that’s exactly how it looks like. In case you wonder where the name comes from, have a look at the Wikipedia article Klingon Starships.

More info about the new shawl knitting pattern and the release “party” will be announced separately – likely tomorrow!