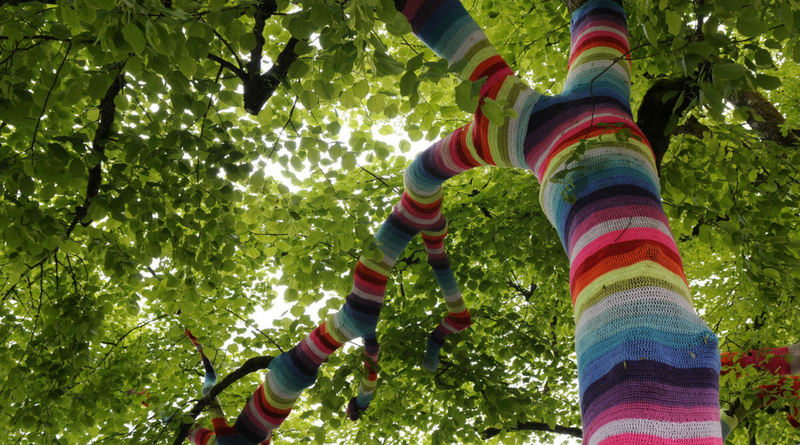 About 15 years ago, I was invited to join a knitting group. My reluctant response — “When would I do that?” — was rejoined with “Sunday afternoons at 4,” at a friend’s yarn shop not ten minutes drive from my home. I agreed to give it a try.

My grandmother had taught me to knit at age eight, and I knitted in class throughout college and for a few years thereafter. Then decades passed without my touching a knitting needle. But within two Mondays in the group, I was hooked, and I was on my way to becoming a highly productive knitter.

I’ve made countless socks, baby hats, shawls, stockings, sweaters, scarves, hats, mittens, and hats for newborns. I take a yarn project with me everywhere, especially when I have to sit still and listen. As I’d discovered in college, when my hands are busy, my mind stays focused on the here and now.

It seems, too, that I’m part of a world-wide resurgence of interest in needle and other handicrafts, and not just among old grannies like me. The Craft Yarn Council reports that a third of women ages 25 to 35 now knit or crochet. Even men and schoolchildren are swelling the ranks, among them my friend’s three daughters, ages 10, 12 and 14.

Last April, the council created a “Stitch Away Stress” campaign in honor of National Stress Awareness Month. Dr. Herbert Benson, a pioneer in mind/body medicine and author of “The Relaxation Response”, says that the repetitive action of needlework can induce a relaxed state like that associated with meditation and yoga.

Once you get beyond the initial learning curve, knitting and crocheting can lower heart rate and blood pressure and reduce harmful blood levels of the stress hormone cortisol.

But unlike meditation, craft activities result in tangible and often useful products that can enhance self-esteem. I keep photos of my singular accomplishments on my cellphone to boost my spirits when needed.

Since the 1990s, the council has surveyed hundreds of thousands of knitters and crocheters, who routinely list stress relief and creative fulfillment as the activities’ main benefits. Among them is the father of a prematurely born daughter who reported that during the baby’s five weeks in the neonatal intensive care unit, “learning how to knit preemie hats gave me a sense of purpose during a time that I felt very helpless. It’s a hobby that I’ve stuck with, and it continues to help me cope with stress at work, provide a sense of order in hectic days, and allows my brain time to solve problems.”

A recent email from the yarn company Red Heart titled “Health Benefits of Crocheting and Knitting” prompted me to explore what else might be known about the health value of activities like knitting. My research revealed that the rewards go well beyond replacing stress and anxiety with the satisfaction of creation.

For example, Karen Zila Hayes, a life coach in Toronto, conducts knitting therapy programs, including Knit to Quit to help smokers give up the habit, and Knit to Heal for people coping with health crises, like a cancer diagnosis or serious illness of a family member. Schools and prisons with craft programs report that they have a calming effect and enhance social skills. And having to follow instructions on complex craft projects can improve children’s math skills.

Some people find that crafts helps them control their weight. Just as it is challenging to smoke while knitting, when hands are holding needles and hooks, there’s less snacking and mindless eating out of boredom.

A 2009 University of British Columbia study of 38 women with the eating disorder anorexia nervosa who were taught to knit found that learning the craft led to significant improvements. Seventy-four percent of the women said the activity lessened their fears and kept them from ruminating about their problem.

Betsan Corkhill, a wellness coach in Bath, England, and author of the book “Knit for Health & Wellness,” established a website, Stitchlinks, to explore the value of what she calls therapeutic knitting. Among her respondents, 54 percent of those who were clinically depressed said that knitting made them feel happy or very happy. In a study of 60 self-selected people with chronic pain, Ms. Corkhill and colleagues reported that knitting enabled them to redirect their focus, reducing their awareness of pain. She suggested that the brain can process just so much at once, and that activities like knitting and crocheting make it harder for the brain to register pain signals. More of Stitchlinks findings are available at their website.

Perhaps most exciting is research that suggests that crafts like knitting and crocheting may help to stave off a decline in brain function with age. In a 2011 study, researchers led by Dr. Yonas E. Geda, a psychiatrist at the Mayo Clinic in Rochester, Minn., interviewed a random sample of 1,321 people ages 70 to 89, most of whom were cognitively normal, about the cognitive activities they engaged in late in life. The study, published in the Journal of Neuropsychiatry & Clinical Neurosciences, found that those who engaged in crafts like knitting and crocheting had a diminished chance of developing mild cognitive impairment and memory loss.

Although it is possible that only people who are cognitively healthy would pursue such activities, those who read newspapers or magazines or played music did not show similar benefits. The researchers speculate that craft activities promote the development of neural pathways in the brain that help to maintain cognitive health.

In support of that suggestion, a 2014 study by Denise C. Park of the University of Texas at Dallas and colleagues demonstrated that learning to quilt or do digital photography enhanced memory function in older adults. Those who engaged in activities that were not intellectually challenging, either in a social group or alone, did not show such improvements.

Given that sustained social contacts have been shown to support health and longevity, those wishing to maximize the health value of crafts might consider joining a group of like-minded folks. I for one try not to miss a single weekly meeting of my knitting group.